Deprecated function: The each() function is deprecated. This message will be suppressed on further calls in menu_set_active_trail() (line 2396 of /home/624077.cloudwaysapps.com/terrhbpvku/public_html/includes/menu.inc).

Webster’s definition of a myth is as follows: “A traditional story of unknown authorship, ostensibly with a historical basis, but serving usually to explain some phenomenon of nature” or “any fictitious story or unscientific account, theory or event”.

Baseball is full of myths and stories from Babe Ruth’s famous “called shot” in the 1932 World Series vs. The Chicago Cubs to Josh Gibson hitting a home run so far in Pittsburgh that it never came down. The next day Gibson was playing in Philadelphia when a ball dropped from the heavens into an outfielder’s glove. The umpire pointed at Gibson and shouted “You’re out – yesterday in Pittsburgh…” Perhaps the biggest baseball myth of all involves one man: Abner Doubleday.

Doubleday is designated as the “Father of Baseball”. According to legend, one day in 1839 at Cooperstown, New York while either watching or playing a game of Town Ball, Doubleday is credited with sitting down and writing the rules for a new game; he called it “Base Ball”. We now know this is not true. There really was not a specific date for the beginnings of baseball but there are important events in the life of our national pastime.

Baseball’s most direct ancestors are the British games of Cricket and Rounders. These games were brought to New England by the earliest colonists. Soon there were many variations of the game with names such as “Old Cat”, “One or Two Old Cat”, “Town Ball”, “Barn Ball”, “Burn Ball”, “Round Ball”, “Base” and “Base Ball”. Early versions of baseball were played everywhere: schoolyards, farmer’s fields & city streets. Revolutionary war soldiers played ball at Valley Forge. Slave children played in the South. Even Lewis & Clark tried to teach a group of Nez Perce Indians the game of “Base”.

So where did formal organized baseball begin? New York City.

In the spring or summer of 1842 a group of young gentlemen began to get together and play the game in one form or another and on September 23, 1845 they formally established themselves as the New York Knickerbockers Base Ball Club. The club's president at the time, Daniel Lucious "Doc" Adams drafted a set of rules now referred to as "The Laws of Base Ball," destined to change the game forever: the infield would now be diamond shaped not square, 1st and 3rd bases were set 42 paces apart, the balk rule was identified and outlawed, foul lines were established, pitchers were to throw underhand, batters got 3 missed swings before called out and most important, runners were to be tagged or thrown out…not thrown at.

In 1857 the Knickerbockers and 15 other clubs banded together to form The National Association of Base Ball Players. It made still more changes to the game: nine men to a side, bases were set at 90 feet apart, an Umpire was given the power to call strikes, no one was allowed to catch the ball in his cap and above all the game was to remain an amateur’s game – no one was to be paid.

In addition to the afforementioned "Doc" Adams, there was a gentleman by the name of Henry Chadwick who, for a time, played shortstop for the Knickerbockers. He convinced newspapers baseball results were newsworthy. He became the country’s first baseball editor, introduced the box score and published baseball guides and yearbooks. In the spring of 1861 Chadwick was in Richmond, Virginia trying to start a new club when the new season was interrupted by the outbreak of the Civil War.

Up until the American Civil War baseball was largely a northern game – particularly in the New York area. In the 1850’s, Town Ball was still preferred in New England over baseball however this was beginning to change in favor of baseball by the late 1850’s. Once the war started and northern troops were on the move the game spread with them.

It has been stated only 10%-15% of a civil war soldiers life was taken up by combat; the rest of his life was filled the tedium and boredom of camp life. However one of the activities conducted by the men to pass the time was baseball. Because the game was so portable it seems they played it everywhere: behind the White House where Abe Lincoln and his son Tad would watch, in southern prison camps where Northern soldiers spread the game throughout the south by teaching it to their Southern hosts. They also played the game close to battlefields.

An Ohio private wrote home from Virginia in 1862: “It is astonishing how indifferent a person can become to danger. The report of musketry is heard but a very little distance from us yet over there on the other side of the road is most of the company. Playing bat ball and perhaps in less than half an hour they may be called to play a ball game of a more serious nature.”

A union soldier named George Putnam recalled “suddenly there came a scattering fire of which the three outfielders caught the brunt; the center field was hit and was captured, the left and right field managed to get back into our lines. The attack was repelled without serious difficulty but we had lost not only our center field but the only base ball in Alexandria, Texas.”

The Civil War can certainly be pointed to as the biggest turning point in the history of the United States as well as the spreading of the game of baseball as it become a national game. To this point the game was largely played by professional gentleman; once the game was spread across the country all facets of life played the game: farmers, lawyers, soldiers, laborers, immigrants and women. It had become more democratic and helped to bring about healing the wounds of the Civil War. It helped unify the country and encouraged the scores of new immigrants pouring into this country to feel more “American”. It was clearly identified as the “American Game” 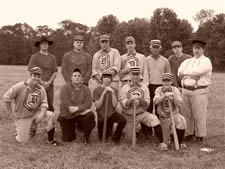